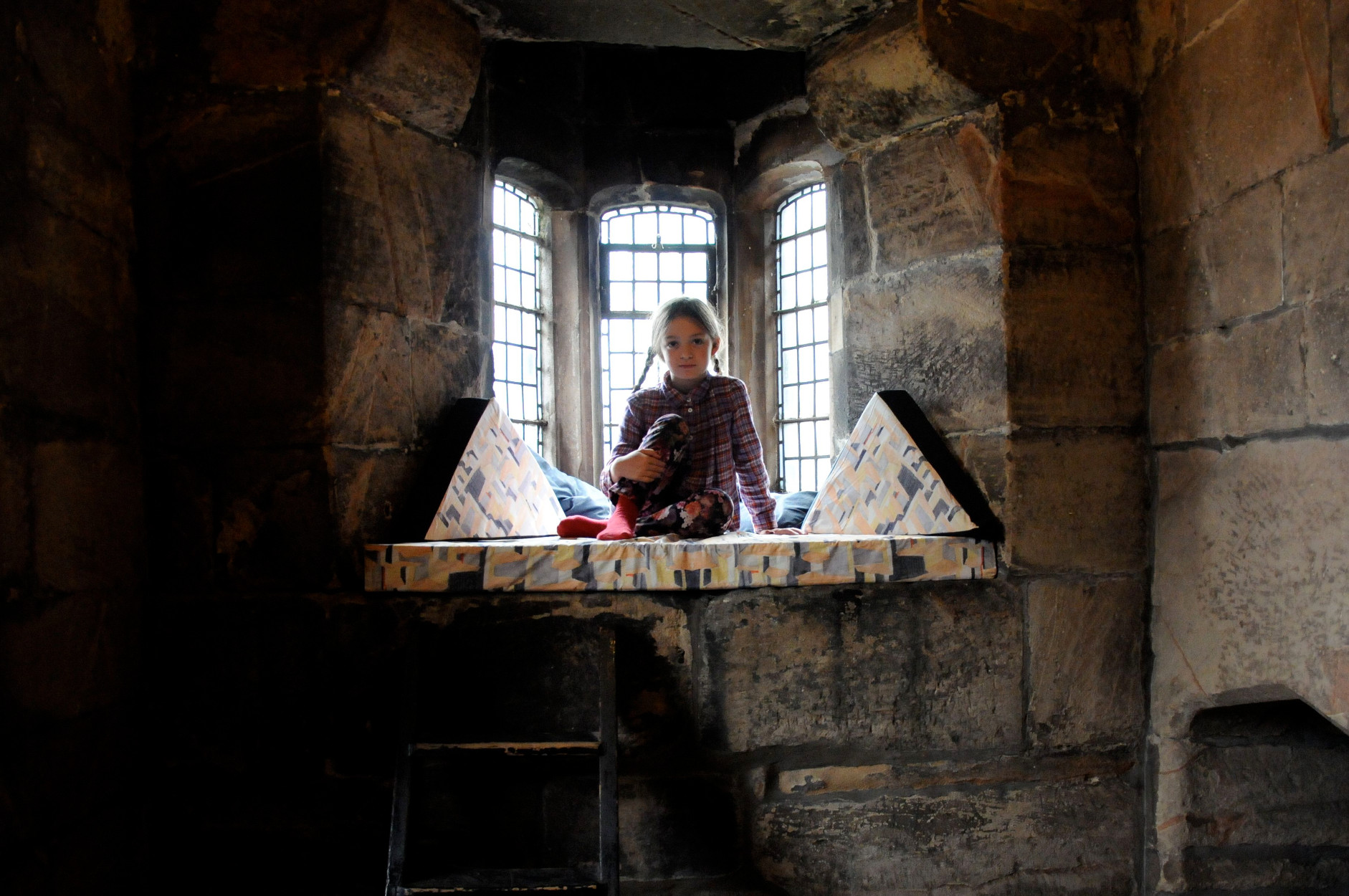 A decade after it was called a 'cultural desert', Macclesfield is now a flowering oasis thanks to the Barnaby Festival. Liz Cookson tells us all about it

Lesley Guy: How did the Barnaby Festival come about?

Liz Cookson: In 2009 a group of like-minded people in Macclesfield got together to generate a vision for a festival of arts, culture and fun, to be based in the town centre and rooted in Macclesfield's heritage. This was after Macclesfield was dubbed a 'cultural desert' by The Times in 2004, an accolade which, given its affluence and proximity to the cultural metropolis of Manchester, was pretty hard to fathom. As one Barnaby founder says, this was like 'showing a red rag to a bull' and now, in its fifth year, the festival is a registered charity and is described by Arts Council England as a 'microcosm' of what it hopes arts festivals will achieve.

LG: What makes it different to other arts festivals?

LC: It is historically and culturally rooted in Macclesfield: Barnaby Festival has revived an annual midsummer celebration which began as the June Barnaby Fair in 13th century Macclesfield, featuring parades, circuses, carnivals and mill shut-downs (and until the 1980s, the June Barnaby fortnight holiday). Also, its activity is contained within the town centre, so the work is made within the context of the town's heritage buildings, museum collections, shops, cafés and urban spaces. 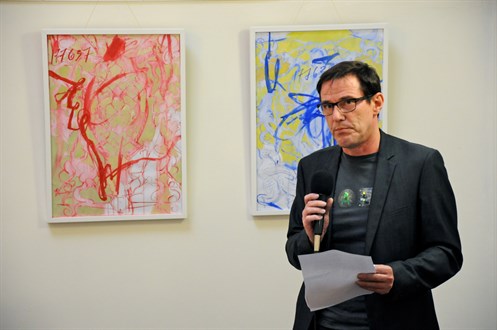 LG: It looks massive - describe the range of events on offer.

LC: Each Barnaby Festival has a theme: last year's was 'Metamorphosis'; this year it is 'Industry', in reference to Macclesfield's prominent role within the silk and textile industries, with events including a gothic opera, comedy, film screenings and live music, alongside the 36 exhibitions in Barnaby Art. There's plenty of art and fun activities for kids too, and an industry-themed carnival parade.

LG: Who are the organisers and is it run with any particular philosophy in mind?

LC: Directed by Lynne Jones, a former BBC Radio journalist, it is run by around 200 volunteers and aims to provide a platform for the town's home-grown artists, and spotlight its heritage buildings and collections. From the outset, presenting an ambitious contemporary art strand of the festival has been at the forefront, with a dedicated visual arts steering group selecting and commissioning new works by nationally renowned artists. 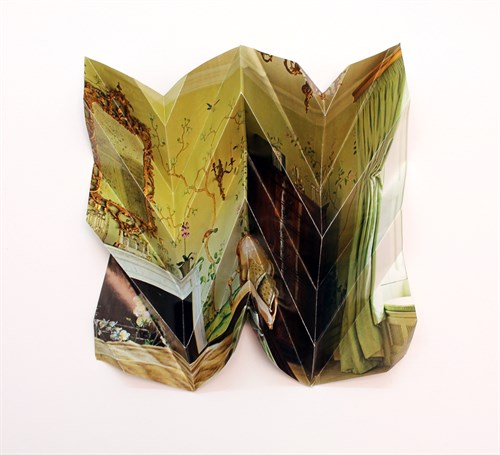 LG: Describe the venues and locations.

LC: Having no dedicated art venue to speak of, the town itself is the venue, so art is encountered in non-traditional spaces such as shops, cafés, buildings. Emily Speed's installation, 'Solitude', is located in the English gothic Savage Tower of St Michael's church, accessible via a precarious set of winding stone steps, not far from Su Hurrel's vintage Ladybird Ladybird caravan, site of eco art activities. In contrast, PAPER Gallery have set up a pop-up gallery in a disused shop unit in the Grosvenor Shopping Centre, in between Argos and the Indoor Market; and Wendy Williams's paper shoes are installed in a bed shop, mimicking the tiny clogs worn by the silk mill child-workers.

LG: How have the people of Macclesfield responded?

LC: The response has been hugely positive by people of all ages, with children in particular: for example, they imagine themselves as fairytale princes and princess in Emily's 'Solitude', inspired by the tale of the Macclesfield Anchoress, Dame Joan, who lived there alone during the 16th century. The installation is beautifully simple, comprising upholstered furniture, a bookwork about spaces designed for one, and silence. 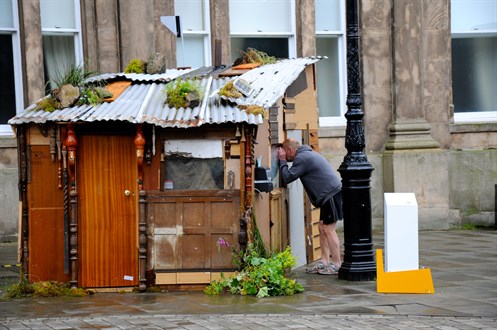 LG: What have you got lined up this year? Anything particularly exciting?

LC: This year we have commissioned Arts Council-funded works by Emily Speed, Hilary Jack, Owl Project, and Mit Senoj, all of whom have made new works in response to the 'Industry' theme. Hilary Jack's 'InsideOutHouse', a shed-like dwelling built from reclaimed furniture, sits outside the Town Hall emitting smoke and playing the sound of its own making (a reference to the work of Robert Morris). Kids love to press the button and make the chimney smoke. Mit Senoj's large-scale paintings on paper, installed in the Town Hall's stairwell, are re-workings of original silk pattern sketches found in bound folios held in the town's Silk Museum Archives; and Owl Project's ambitious 'Play the Jacquard Loom' fuses 19th century manufacturing machinery and digital technology to create a time-based sound piece, performed amongst the Jacquard looms of the Silk Museum's Paradise Mill. 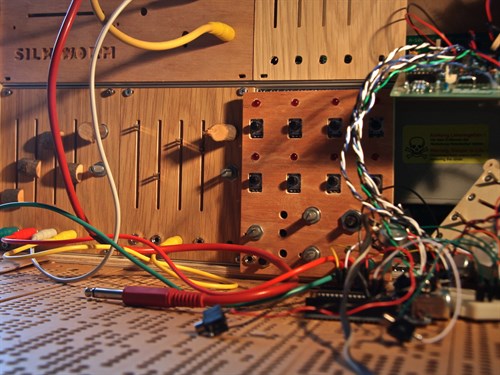 Although 'culturally bereft', Macclesfield has always had a thriving alternative music scene, and Barnaby celebrates this by inviting  Macclesfield-born Stephen Morris, founder member of Joy Division to curate the music strand which has seen Tim Burgess (The Charlatans) play an amazing set with members of New Order in Christ Church, a disused Methodist church. Finally, art, music, and industry came together with Jeremy Deller's Acid Brass, performed by the Fairey Band, to an audience of children, brass band aficionados and ex-ravers.

Liz Cookson is a member of the Barnaby Festival visual arts team and is a freelance writer.

Art Across the City by Emma Gelliot >