Home Archive Art Across the City 2014 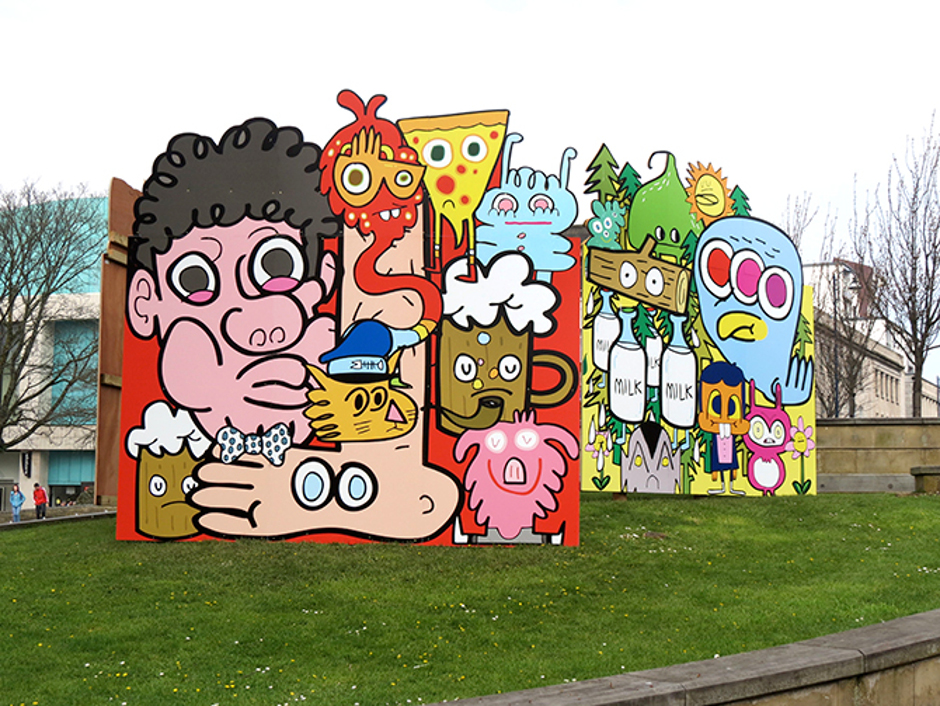 Jon Burgerman, Portrait of the Artist as a Young Doodle, 2014

Emma Geliot reports from Swansea's public art extravaganza Art Across the City. With giant heads and a mega poem - this year looks epic!

As Wales celebrates the centenary of Dylan Thomas’ birth, the city-that-was-a-town is at the epicentre of a year of frenzied activity and Locws International has not only jumped on the festival bandwagon but seems to be cracking their whip over the foam-flecked horses.

The festival, best known for creating temporary-but-sometimes-they-become-permanent artistic interventions in the public realm, is injecting literature into the mix. Last year Dylan Thomas’ association with the city was marked by Mark Folds’ 'Dylan’s Pencil' in Cwmdonkin Park, the setting for several of Thomas’ poems. Folds' sculpture is one of a growing number of permanent works that have become part of the fabric of the city and these, with the new commissions form part of a trail around Swansea.

Now, on a blind wall - the anonymous non-customer-facing façade of a shopping centre - Jeremy Deller’s mural, in billboard style, proclaims: “More poetry is needed”. It calls out to the steady stream of traffic plying up and down the Oystermouth Road towards or away from the sandy beaches and holiday homes of the Gower. And this call to verse is taken up by poet Rhian Edwards, who provided the opening stanzas of the 'Tawe Mega Poem'. Fed by the public, this epic is already at 46 pages and growing. 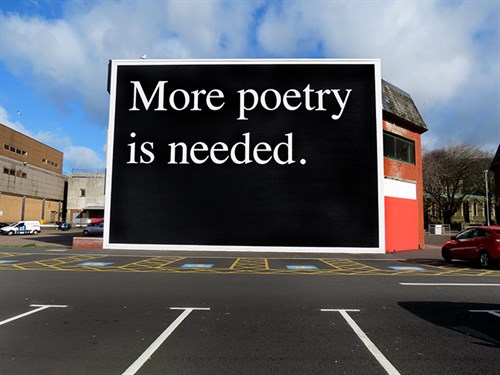 Other writers have their say too: Rachel Trezise’s six micro fictions can be found in the pubs and cafes across the city and Niall Griffiths’ four prose pieces hang beneath the monumental heads created from scans of workers at the nearby megalith: the Amazon distribution centre. These giant laser cut heads – 'The General Public', made by Ultimate Holding Company loom above the bustle of the bus station, while Griffiths’ texts create monologues beneath them.

The first Locws international project was launched in 2000 and got into a biennial swing from 2007, with the international festival being replaced by more locally based projects in the down year. These two strands have now merged and Locws is moving forward as an annual programme, backed by the City and County of Swansea and regularly supported by the Arts Council of Wales, it was also part of the Swansea bid to become UK City of Culture in 2017, which was pipped to the post by Hull last November. With 62 previous projects prior to this outing, Art Across The City is now engrained in the psyche of Swansea and culture is certainly firmly on the regeneration agenda for the council. 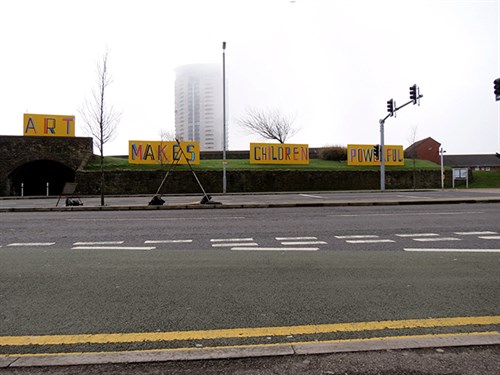 Locws International, the charity that programmes Art Across the City, is more than a delivery vehicle for institutional or political agendas. Past projects have engaged in communities as diverse as the population of this seaside city and pointed up local stories – Richard Higlett’s 'A Song for Jack', Bedwyr Williams’ 'Lionheart & Lightsout' and now Tom Goddard’s 'The Life, Death and Afterlife of Lizzie The Elephant' - allowing for multiple perspectives and a kind of cultural layering of the city.

Key to the mission to reach the public is an education programme that was embedded from the outset and schools have been closely involved from the early days of what was first simply called Locws. Rob and Roberta Smith’s bright statement 'Art Makes Children Powerful' echoes an ambition that runs throughout the programmes of the council’s education department and the outreach work of galleries such as The Mission Gallery and the Glynn Vivian Art Gallery (the latter currently closed for a major renovation project). 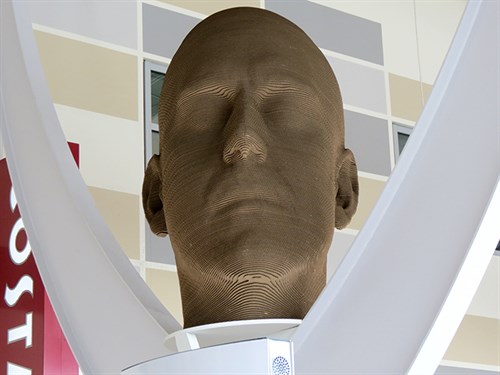 For artists, Swansea offers rich pickings for ideas. It’s the buffer between the last vestiges of what was once a highly industrialised strip of land and the rural hinterland and beauty spots of West Wales. Swansea was the home of copper (Copperopolis), neighbouring Llanelli (Tinopolis) once made tin plate and steel is still made in Port Talbot to the east. It still has the docks and port, where once all goods and people were traded in and out, while above are the south Wales valleys, home of the coal that fed the making of so much metal.

The city centre was badly bombed during the second world war and re-built in brutish (rather than Brutalist) style, then gradually re-modelled as the shopping centre bug began to bite and it has one of the most fiendish traffic systems in Wales. The sheer diversity of landscapes to respond to would be excitement enough, but it’s the stories, the communities and the buildings that also intrigue artists and ensure that Locws can sustain a programme that will continue to capture the imagination.

The context and history are probably less important to the success of Art Across The City than the incredibly lively and collaborative arts community in Swansea. Groups such as Elysium Gallery (gallery and studio spaces and much more) have also offered the citizens of Swansea the opportunity to re-imagine their surroundings through two Disruption  events, while the Vetch Veg project, run by Owen Griffiths as part of the Cultural Olympiad in 2012 turned the old Swansea city football club pitch into a community garden.  A concerted effort between a number of artists and organisations, including Volcano Theatre, Elysium, Supersaurus and Coastal Housing, has seen the beginnings of a transformation for the formerly unloved High Street – the most visible sign of this being an early commission from Locws for Sean Puleston, whose mural 'We Are Here' flags up an intention to make things better. 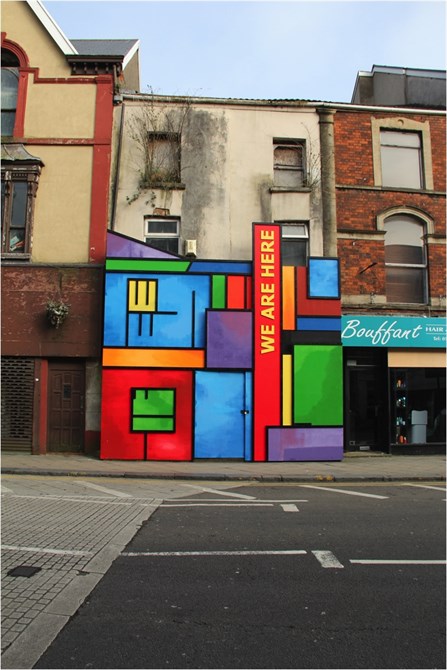 And let’s face it, when art in the public realm works it does so because it changes not only the look of a place but also people’s feelings and attitude towards that place. The Art Across The City series taps into a strong desire to reinvent Swansea and invites artists to articulate ideas and responses to the place in ways that will animate communities and help to shape change.

While councils across the land are paring back their support for the arts by closing venues and cutting grants to organisations, Swansea’s City & County Council seem determined to swim against the tide, a sentiment expressed by Cllr David Phillips in his opening speech to launch Art Across the City 2014. Phillips said that the arts and culture have a key role in the future development of the city and this sentiment is echoed in Cardiff Council’s new initiative, Cardiff Contemporary, preparing for a major burst of visual arts activity this October.

Meanwhile the Arts Council of Wales has been working with the Welsh Government to embed arts projects into the regeneration agenda. All of this shows signs of creating some really exciting opportunities for artists to get involved in changing the way that people feel about their towns and cities.

Art Across the City 2014, Swansea 12 April – 01 June
Find out more at locwsinternational.com

Emma Geliot is an arts journalist and arts project manager. She is currently editor of Culture Colony Quarterly (CCQ) Magazine, and writes for a number of publications, outlets and platforms (most of them beginning with A). Emma is co-director of Outcasting: Fourth Wall2 (O:4W) and artists’ moving image festival, is the consultant for a number of public art projects in South Wales and the South West of England and is a National Advisor for the Arts Council of Wales.

Rant 89: Throwing The Baby Out by Emma Geliot >

Notes from Wales - Here, There and Everywhere by Alicia Miller >