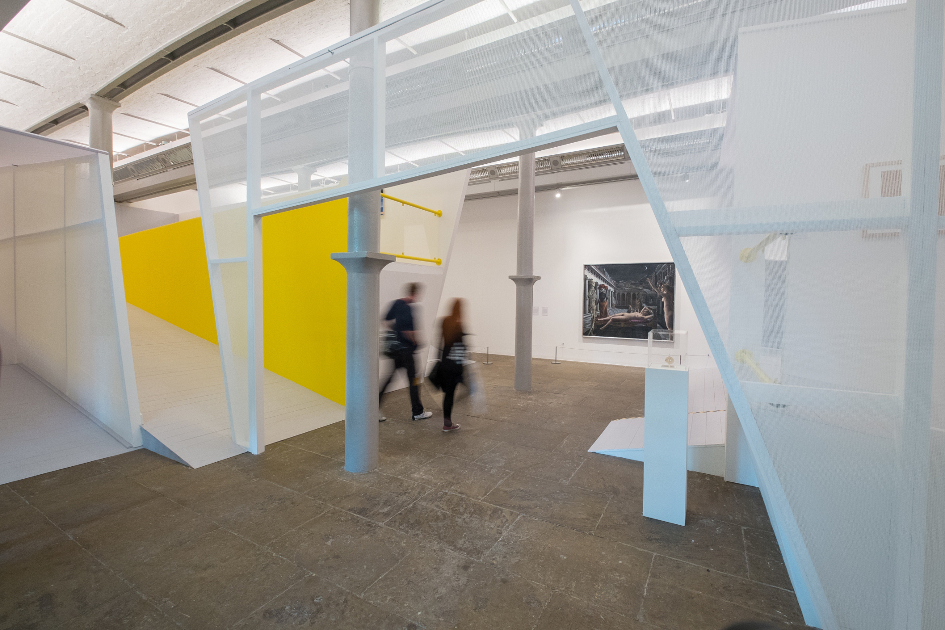 This year’s Liverpool Biennial does not necessarily set out to dazzle. But Sheila McGregor finds that ‘A Needle Walks into a Haystack’ has many surprises in store

From the moment you set eyes on the Old Blind School, the central venue in this year’s Liverpool Biennial, it’s clear that this is an event in which the use of space and the interplay between past and present are paramount.

This former school for the blind (the first in the country) is a building in two halves, one erected in 1791 and the other an art deco extension added in 1932. On the façade of the latter, relief carvings by John Skeaping, first husband of Barbara Hepworth, represent pursuits such as brush-making and basket-weaving that were once the stock-in-trade of the school’s pupils.

The approach taken by the Biennial’s curators, Mai Abu Eldahab and Anthony Huberman, reveals itself gradually room by room, from Norma Jeane’s solar-powered ice machine in the main entrance hall to Rana Hamadeh’s immersive sound installation in its own self-contained space at the top of the building. This is an exhibition which calls the familiar rituals and conditions of everyday life into question, each new encounter an unravelling of our assumptions and invitation to look or listen again.

Things rarely behave as you expect them to. Judith Kopf’s baskets and coiled ropes combine the promise of utility with properties that defy the law of physics. Michael Stevenson, inspired by a Panamanian mathematician who believed that the devil resided in the swing of a hinged door, connects doors from the mathematics department at Liverpool John Moore’s University to computer games, in a fiendish experiment with chance and control. 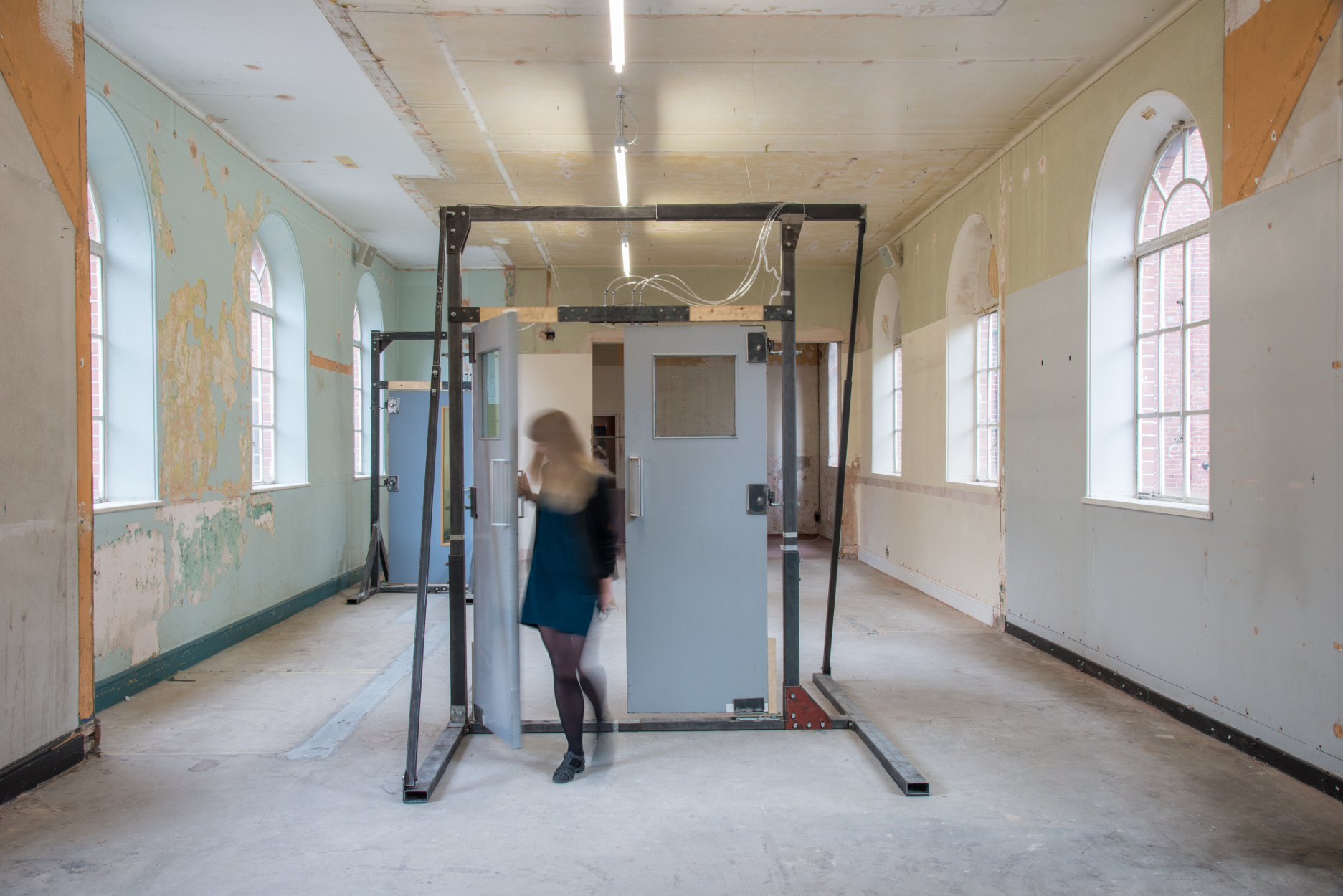 Some of the exhibits make you chuckle. Peter Wächtler’s large-scale watercolours of sexual liaisons, observed with deadpan detachment by an all-seeing butler, lay bare the impulses that lurk behind the exterior of our social lives. Amelie Von Wulffen creates cartoons of anthropomorphic fruit and vegetables, which jog, skate, booze, bicker and generally hang out together, the very embodiment of hectic, sociable and fractious living. Drawing and older audio-visual technologies are much in evidence, as if to remind us that some things are fundamental to the artist’s repertoire of skills.

An uncharacteristic historical show at the Bluecoat takes the life and art of James Abbott McNeill Whistler as its subject. But don’t expect to find here the big, show-stopping portraits or nocturnes. The focus is instead on Whistler’s writings, persona and chequered career, including his public spat with Ruskin and bankruptcy at the hands of Liverpool shipping magnate Frederick Leyland, who refused to pay him the full whack for the famous Peacock Room and handed over only half the £2K fee instead. Through careful historical documentation the exhibition brings to life ideas about the role, value and labour of the artist that remain relevant and - just as enduringly - unresolved.

Tate Liverpool has invited the veteran French architect Claude Parent to re-configure its ground-floor Wolfson gallery with a series of sloping walkways, screens and lookouts that embody his life-long obsession with the ‘oblique’ and give more than a nod to the gallery’s dockside location and nautical history. Into this environment the Biennial’s curators have inserted a curious but somehow satisfying assortment of works from the gallery’s permanent collection, including Edward Wadsworth’s woodcuts of dazzle camouflage ships during the First World War. In a nearby dock you can see an approximation of the real thing: a well-known local pilot ship given an outrageous abstract makeover by Venezuelan artist Carlos Cruz-Diez. 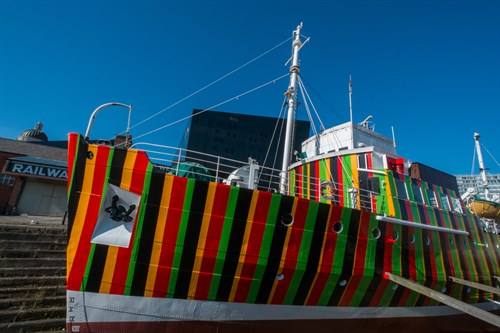 Elsewhere at Tate a permanent collection display loosely themed around life in the home brings to light some rarities: among its surprises are two chic rugs designed by, of all people, Francis Bacon, a suite of garden prints by the neglected Ivor Abrahams and some glorious ceramics by Andrew Lord. On a more metaphysical note, Susan Hiller’s epic installation ‘Balshazzar’s Feast’ and a filmic psychodrama by Keren Cytter remind us that home is also the centre of our emotional life, the place where our most primal relationships and behaviours take form and play out.

At FACT, a film by Sharon Lockhart examining how children make their own imaginative space through social activity and play has a slowness that gently draws you in. Her work offers insight into real people, leading real lives – in its way a welcome respite from the more cryptic sensibility of the other Biennial exhibitions.

The Liverpool Biennial takes place across a smaller number of venues this year, but is no less intellectually ambitious for that. Director Sally Tallant’s background as a former Head of Education at the Serpentine perhaps accounts for the more than usually informative website and interpretive materials, which provide just enough help without becoming didactic. In the end, ‘A Needle Walks into a Haystack’ leaves you free to find your own way, as its deliberately enigmatic title might imply. So much the better, in my view. It’s good to be reminded that, in matters of meaning and interpretation, the visitor has some agency too.

The Liverpool Biennial runs until 26 October 2014

Sheila is the Director of Axisweb

Art Across the City by Emma Gelliot >