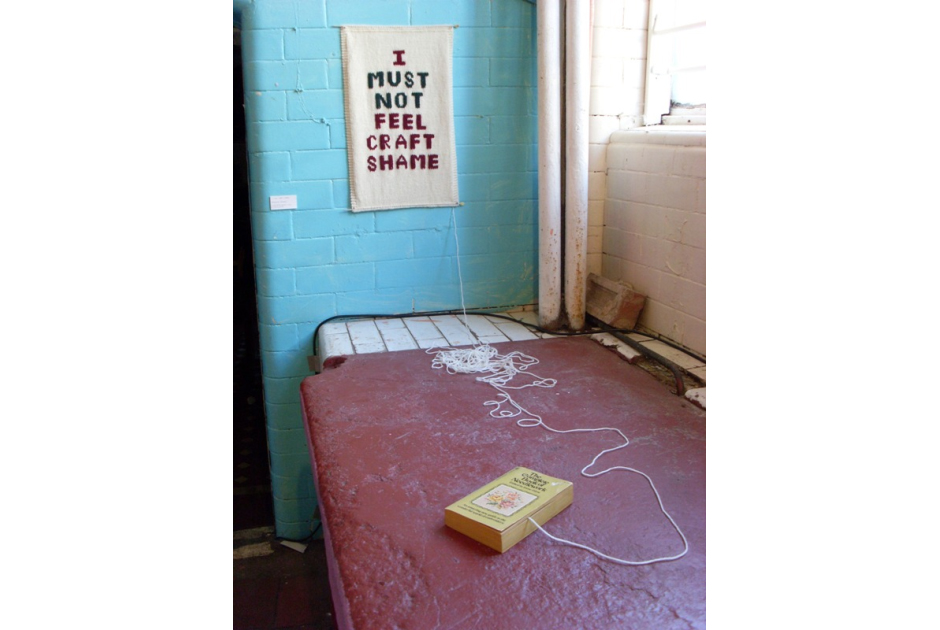 What is the prevalence of the knitted cake doing for the radical claims of craftivism? Does it undermine the political and feminist critique of the DIY craft revival? Ele Carpenter looks at activist tendencies in craft in relation to contemporary capitalism.

It’s hardly surprising that people are sceptical about the political claims of craftivism when they are overwhelmed by knitted cakes at every gift shop and summer faire!

Mixed up in the revolutionary fervor of DIY craft is a revival of 1940s/50s domestic style epitomised by the fashion for knitted cake.

Instead of using collective craft to reclaim public space, knitting and baking cake has become a celebration of feminine virtue [1].

Now that the nostalgia for wartime ‘make do and mend’ has been redesigned for a contemporary shopping extravaganza - the knitted cake has become a symbol of the capitalist recuperation of feminist critique.

The cup cake is nearly synonymous with chocolate as the answer to 'what women really want?' [2]commodifying women's desire as bodily sustenance and nurture without nutrition or subjective choice.

The open source hybrid tech-craft culture is rapidly evolving through artistic practice [3], and Maker Faires which bring together all kinds of computing, electronics and textile crafts, providing opportunities for cross fertilization of ideas, and increasingly including women’s tech groups such as MzTek.

Activist craft has many forms of symbolism and disguise.

Whilst a seemingly fleeting gesture, the image of the pink shrouded tank circulating on the Internet is an integral part of the work.

The transformation of military hardware into an object of comic irony seeks to disarm the offensive stance of a machine justified by its defensive capability.

Whilst the sinister Trojan undertones of disguising a real weapon as soft and fluffy lead us to review the deaths from ‘friendly’ fire, as well as the women and children who suffer the largest percentage of deaths in most conflicts.

This contemporary perspective on wartime ‘make do and mend’ brings a much needed break from knitting cake.

Ele Carpenter is a curator, writer and artist based in London UK where she teaches in the MFA Curating at Goldsmiths College.

The views expressed in The Rant are those of Ele Carpenter and forum contributors and unless specifically stated are not those of Axisweb. See our terms and conditions