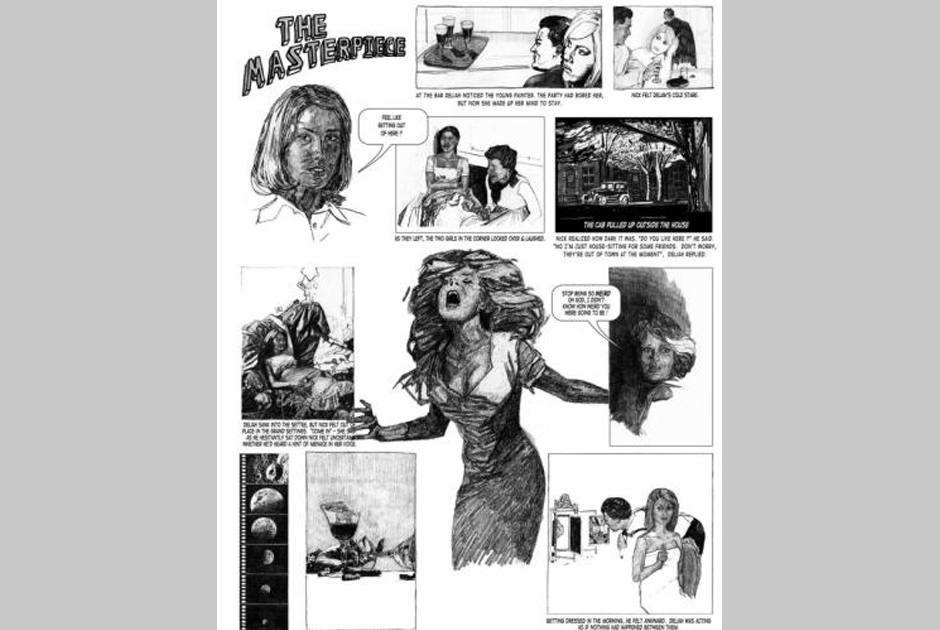 Anna Lovatt selects works from Axisweb that explore diverse uses of drawing - a rich field of enquiry since the 1970s for artists informed by feminism.

Provisional, quotidian, humble and unassuming, the practice of drawing was often overlooked by critics and curators during the modernist period. But since the late 1960s, an emphasis on material processes, conceptual operations and bodily actions has led to a resurgence of interest in the notational and indexical properties of drawing.

Challenging the established dominance of painting and sculpture, artists participated in a broader critique of prevailing structures of power during the 1960s and 70s. It is no coincidence, then, that new and neglected media became rich fields of enquiry for many artists informed by feminism. Catherine de Zegher has gone as far as to suggest that the practice of drawing might be gendered ‘feminine’, the casting out and drawing back of lines activating a relational space reminiscent of that between mother and child.1

Without resorting to such biological metaphors, this curated selection will explore diverse uses of drawing by contemporary artists, who happen to be women. Borrowing my provocative title from Julie Brixey-Williams’s 'Drawing for Girls' (1999), I have deliberately assembled a collection of works that resist classification in terms of any single aesthetic agenda or political position. 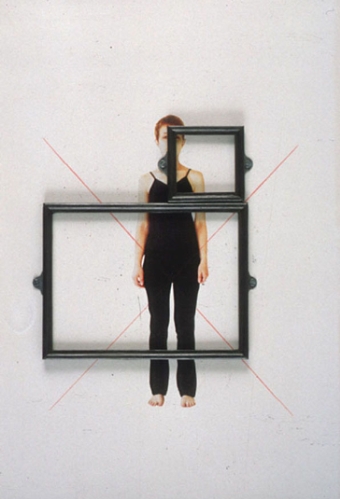 Julie Brixey-Williams’s 'Drawing for Girls' (1999) takes its title from a drawing book given to the artist as a child.

Although she remembers the book containing some sound technical advice, its content reiterated stereotypical gender roles, with the aspiring artist encouraged to copy pictures of dolls’ houses, teapots and prams.2

Appropriating its red ‘X’ from the cross-brace in one such drawing of a pram, Brixey-Williams’s self-portrait is a blunt refusal of predetermined behavioural structures.

Traversed at the crotch by the drawn cross, her photographed body simultaneously traverses two wooden frames covered in graphite.  While breaking out of these frames, the artist is concealed by them, the graphite-covered wood blocking the spectator’s gaze. Rendered anonymous, the artist’s body functions geometrically – as one component in a composition, rather than a self-portrait.

This early work by Brixey-Williams prefigures her current practice, in which drawing maps the body in motion, tracing its movement within and across spaces and disciplines. 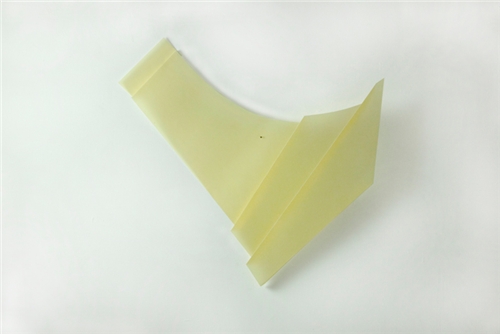 In a very different way, Lilah Fowler’s work is concerned with the linear articulation of spatial and temporal experience. Her paper surfaces are topologically transformed through precise acts of folding, so that each crease in the paper generates a different physical and conceptual space.

Although not ‘drawings’ in any conventional sense, these slight, ephemeral and exploratory works adopt the scale and materials of drawing, providing a counterpoint to Fowler’s larger and more substantial objects in stainless steel and copper.

Unlike some of the other works I have selected, 'Fold' (2010) does not engage directly with issues of gender. But it does partake in a tradition of topological investigation pioneered by female artists including Lygia Clark, Eva Hesse and Dorothea Rockburne during the 1960s.

As in the work of these artists, the subtle modification of a paper surface in Fowler’s recent series serves to analogise intricate conceptual and psychological operations.

Maria Kontis, He does not remember this day, 2002 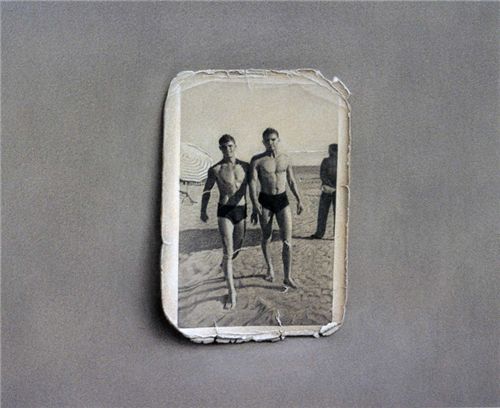 Maria Kontis, He does not remember this day, 2002

The malleability, fragility and ubiquity of paper are eulogised in the work of Maria Kontis. Here photographs, dust-jackets, newspapers and letters appear folded, faded, crumpled and torn – poignantly archaic objects in this era of digitisation.

While the demise of analogue has provided a rich source of material for contemporary photographers, Kontis’s pictures within pictures are meticulously rendered in pastel. Unlike some photorealism they do not approach the condition of photography, but hold it at a distance, re-framing the analogue image at the moment of its obsolescence.

'He does not remember this day' (2002) depicts a yellowed, creased and dog-eared photograph of two men walking on the beach, their physical proximity implying an intimacy obscured by the drawing’s amnesic title. Lost memories, lost loves and lost technologies are thus captured in the precarious medium of pastel, making Kontis’s project a meditative rather than recuperative exercise. 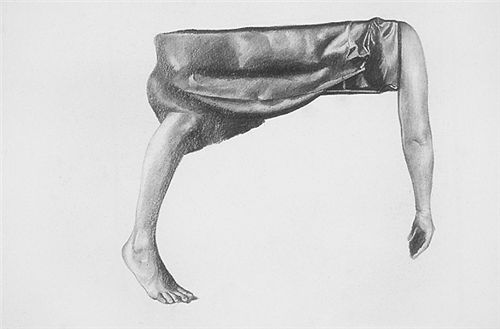 Borrowing its title from Sylvia Plath’s poem ‘The Applicant’, Kate Davis’s series of drawings presents the female body as an aggregate of ill-adjusted parts.

These corporal components suggest malfunctioning automata that totter and balance precariously, sometimes even appearing to levitate.

‘It works, there’s nothing wrong with it’, Plath wrote of the ‘living doll’ proffered for marriage in her poem.3 Yet Davis’s headless woman is inoperative and uncanny, her limbs dangling from boxed compartments like a luckless magician’s assistant.

In Davis’s subsequent practice, drawing has continued to function as a means of assimilating and processing diverse images and references, often with explicitly feminist overtones. From Plath to Virginia Woolf, Carolee Schneeman to Barbara Kruger, the history of feminist art and thought is subject to an analytical gaze that re-evaluates and reconfigures it for the present.

Sue Williams, Dirty Linen on Line (In Collaboration with Paul and Paula), 2003 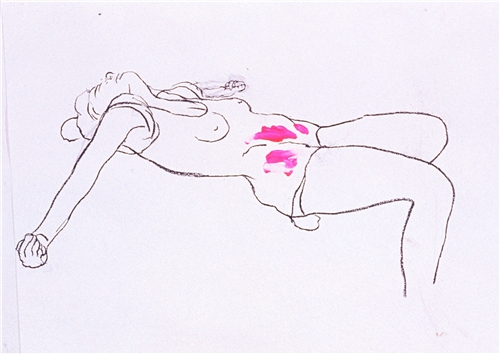 Sue Williams, Dirty Linen on Line (In Collaboration with Paul and Paula), 2003

The limp body of 'The Applicant' is echoed in one of the many drawings that comprise Sue Williams’s ongoing installation 'Dirty Linen on Line' (2003 onwards).

But while Davis utilises the precision and detail afforded by the graphite pencil, Williams harnesses the urgency and candour of the graffito in her charcoal drawings.

'Dirty Linen on Line' comprises over one hundred drawings, writ large on the wall or on huge sheets of paper and used as source material for further works. This ongoing series reflects the endless permutations of ‘femininity’ in our culture, alternately conjuring ‘the girl, the woman, the provocateur, the iconic fantasy, the threat, the seducer, the controller…’4

With their isolated figures and fragments of text-speak, Williams’s drawings oscillate between the urge to communicate and the brutal thwarting of that impulse. Moreover, they re-align drawing with the narrative, figurative and linguistic – those ‘other traditions’ so long suppressed under modernism.5 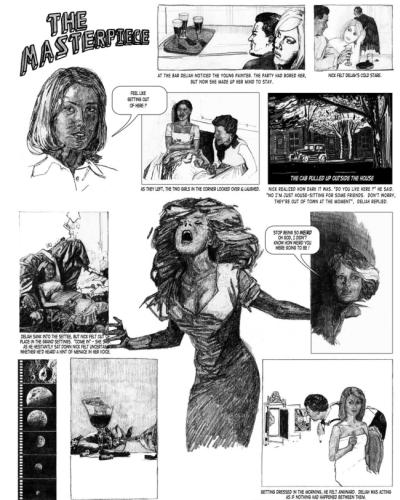 Olivia Plender’s comic book 'The Masterpiece' (2003) tells a paradigmatically modernist tale in a decidedly post-modernist graphic mode. Taking its title from a novel by Emile Zola, the story revolves around Nick, an unrecognised artistic genius striving to produce his ‘masterpiece’ in a noirish 1950s London populated by bohemians, socialites, alpha-males and femme-fatales.6

Plender’s comic books form part of a complex body of historical research, performances, installations and videos, which complicate conventional models of artistic production and distribution. Traversing ‘low’ and ‘high’ culture, 'The Masterpiece' also exposes the gendered connotations of notions like ‘genius,’ which are evident in the comic’s very title.

In selecting these works I have indicated just some of the diverse ways in which contemporary artists are using drawing to deconstruct outmoded hierarchies of subject-matter, medium and authorship. The practice of drawing is not determined by gender, but it has proved an extraordinarily versatile tool for the exploration of identity and sexuality in recent art – fields in which female artists continue to lead the way.

Anna Lovatt is a Lecturer in Art History at the University of Nottingham and an editor of the Oxford Art Journal. Her research focuses on post-Minimal and Conceptual art, specifically the practice of drawing within those contexts. This formed the topic of her PhD thesis, ‘Seriality and Systematic Thought in Drawing 1966-76’, completed at the Courtauld Institute of Art in 2005; and a series of articles on the work of Ruth Vollmer, Dorothea Rockburne and Sol LeWitt published in the journals Art History, October and Tate Papers.

Anna has written catalogue essays on the work of Robert Holyhead and Bob Law and is currently contributing to books on Garth Evans and Sol LeWitt. She is also working on a book, provisionally entitled Drawing Degree Zero: The Line from Minimal to Conceptual Art.