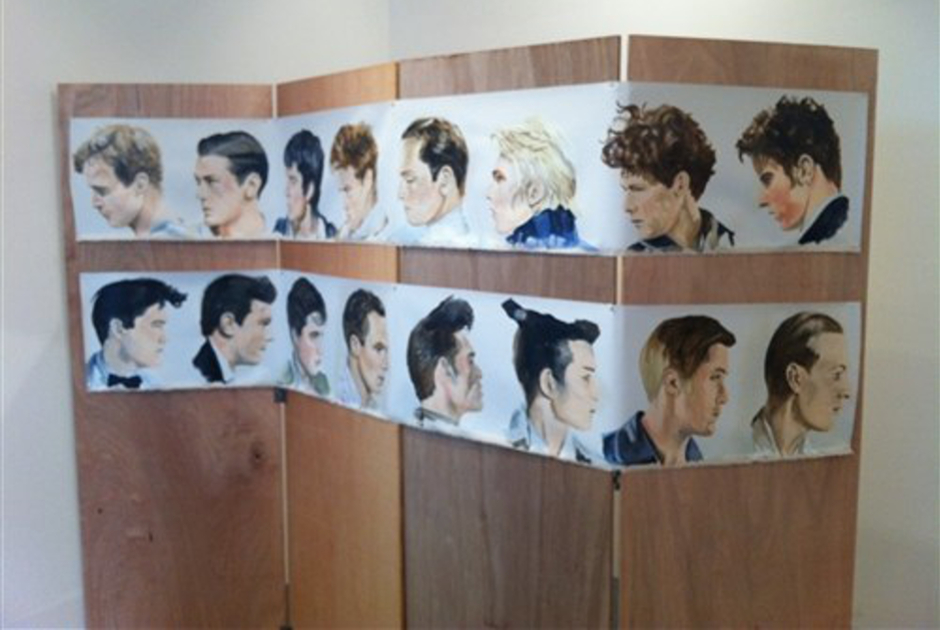 Denise Courcoux, the first of our three Curated Selection Prizewinners for 2014, presents a selection of work from the directory which investigates fandom and personal obsession

Obsessions, deeply personal and often peculiar to anyone but their owners, are the subject matter for this exhibition. The longing to possess a little of something one admires can lead to consuming preoccupation. The works in Possessed are all characterised by a quest to acquire a meaningful closeness to a distant object of desire. The exhibition examines the behaviours and symptoms of fandom through artistic practices: compulsive repetition, a fascination with minutiae, wild theorising, imitation and blind adoration.

Personal passions are a source of pleasure and escapism, but at the same time the intangibility can lead to frustration. Possessed demonstrates the genuine affection generated by unrequited desire and a wry sense of humour in the face of absurdity that many fanatics will recognise. It also, however, reflects the isolating nature of devotion, and the inescapable dissatisfaction of trying to reach the unattainable.

Denise lives in Liverpool and is currently studying for MA Art Gallery & Museum Studies at the University of Manchester. Here she tells us more about the course, her career and how she approached her curated selection.

Tell us about your background
I’m from Coventry and moved up to Chester in 2002 to study for my BA in Fine Art with English Literature. I've been a volunteer and worked on a casual basis at galleries including the Walker Art Gallery, A Foundation, Tate Liverpool and the Bluecoat.

I started working as an Information Assistant at the Bluecoat in Liverpool when it reopened in 2008 following a big capital development. Since 2009 I have been working on the exhibitions programme in the role of Gallery Coordinator.

Why did you embark on your MA?
It had been seven years since I completed my BA and I started to miss being in a university environment and the way it encourages you to think about things critically, something that you often don’t have time to in a busy day job.

Why did you choose your MA course?
The MA Art Gallery and Museum Studies course at The University of Manchester is well established and has a very good reputation. The scope of the modules really appealed to me, offering the opportunity to choose a path tailored to my particular interests.

What in particular have you got from your MA course so far?
The reading I have done has really pushed me to question different aspects of the art gallery and museum world, and attempt to put them into a wider context. Also, I have loved being able to talk about issues with a range of people from very varied backgrounds – I have coursemates and tutors who have non-art backgrounds such as Egyptology or Archaeology, so it’s great to get different takes on museum practice!

How did you come up with the theme of your curated selection?
Fandom and personal obsessions are something I find absolutely fascinating, and often very revealing. Lars Laumann’s film Morrissey Foretelling the Death of Diana, shown at Open Eye Gallery during the 2010 Liverpool Biennial, was very odd and stayed with me.

What has winning the curated selection prize meant to you?
I really enjoyed the whole exercise. Having my writing and ideas validated by the selection panel has given me a huge confidence boost. I hope it will be a springboard for me to progress in a curatorial career as I come to the end of my MA course.

And finally what have you got your eye on at the moment?
I’m researching artist-curated exhibitions for my dissertation, and have particularly enjoyed the Hayward Touring exhibitions The Universal Addressability of Dumb Things (curated by Mark Leckey) and All That Is Solid Melts Into Air (curated by Jeremy Deller).   I find artist-curated projects are often really visually dynamic and do interesting things with interpretation, so it’s a great topic to get my teeth into.

About the Curated Selection Prize 2014

Earlier this year, we asked MA Curating, History of Art and Critical Writing students from across the country to enter our Curated Selection Prize. The brief was to take a look at the Axisweb directory and curate an online exhibition for the website. To enter they had to select a theme, find six art works connected to that theme and write up their choice for our features section.

The three winners are:

They have been awarded £300, one year’s Art Professional Membership and their selection will be published on Axisweb.

More about the Curated Selection Prize 2014 >

Browse the directory to curate your own selection >