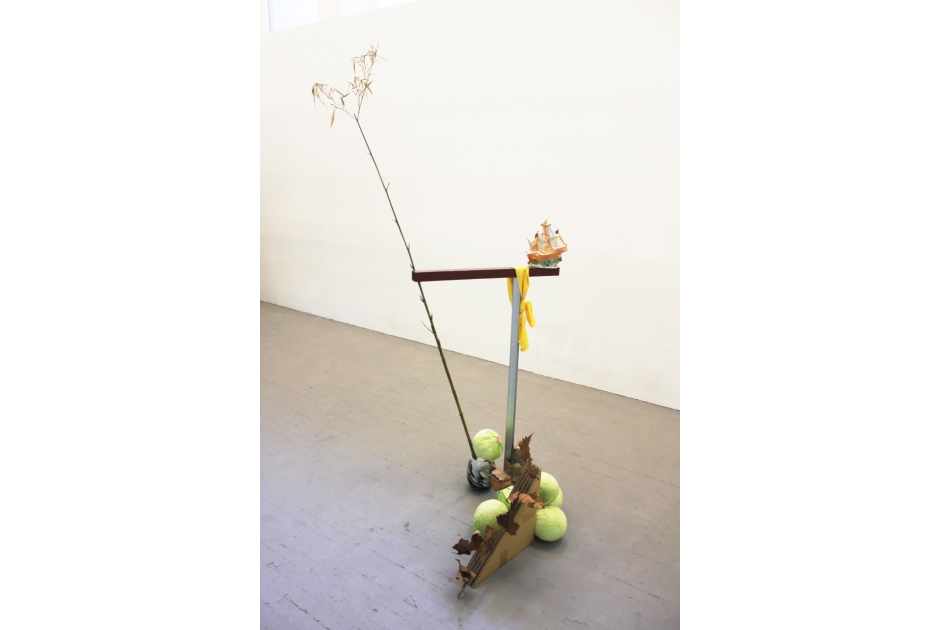 Paul Gwilliam’s work is full of bodily, seal-like forms. There is a constant suggestion of slow lethargic movement, of both lumbering organisms and bumpy objects. Two lumpy pastel-coloured figures dangle entwined, suspended as if from a trapeze or an airlift rescue cable, although actually the supporting figure hangs from an umbilical rope.

Of the four pieces on display, what interested me most were the two carefully considered assemblages. Quietly knowing, humorous and surreal but somehow commonplace, a kind of subtle aesthetic poetry is at work. 'Sarah' (2013) comprises a variety of organic objects and domestic items, such as kitsch detritus, oriental ornamental elements like bamboo and brush-painted vases, alongside ubiquitous practical materials like tape and cardboard. This has an open but atmospheric narrative element, as if to evoke return from the Orient on a merchant ship, stuff in transit, perhaps for the interior decoration of weird, bespoke, slightly industrial architecture.

'Loving would be easy if your colours were like my dreams' (2013) is a large tree-like, slug-like form, wrapped in parcel tape, patched up. A small minty shelf rests neatly on top, hosting a naively made vase and some dried flowers. Within the sculpture are more traditionally crafted elements: glazed ceramics, in the shape of fungus protruding from the wrapped form, are the log’s ornaments. 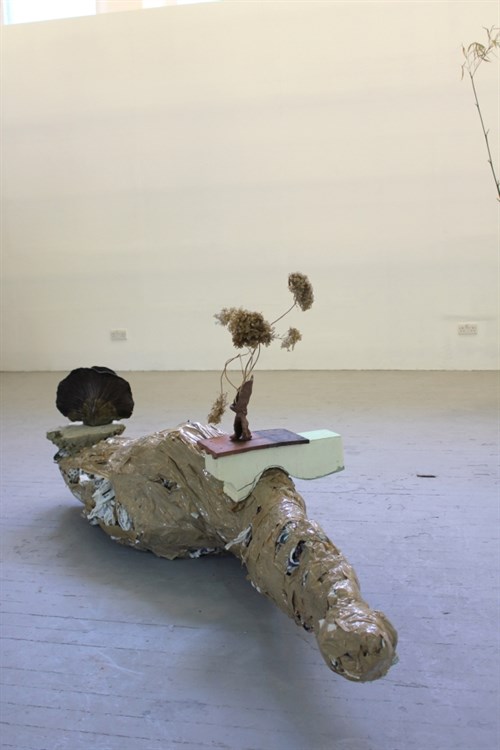 These pieces have an intriguing aesthetic which seems to be part of a subtle language. Soft 1970s pale green, repeated in the ceramics and lump figures, are exaggerated by the collection of cabbages. Packaging materials become artifacts, dried flowers and leaves like brittle shed skins, Japanese decoration, country crafts and classrooms. There is a tension between the heaviness of bodies and clay, and the lightness of spores and exuviae - both manmade and organic. The sculptural elements, natural elements and crafted natural elements have come together in a playful exploration which is nostalgically familiar as well as a little fantastical.