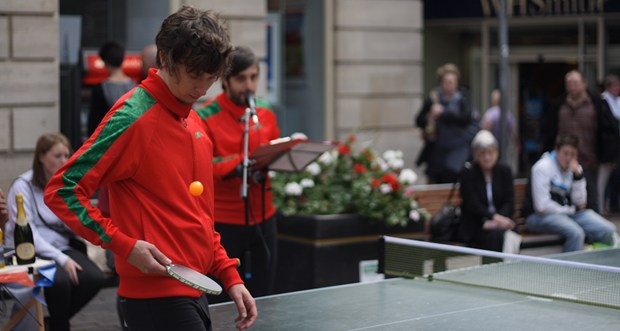 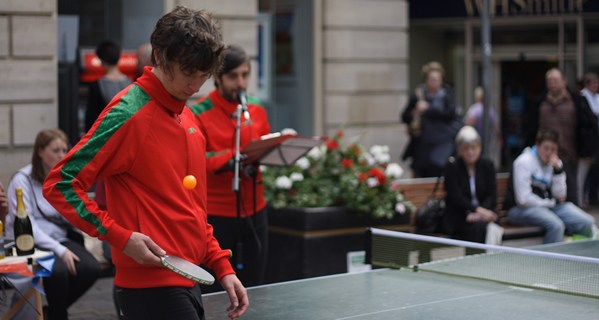 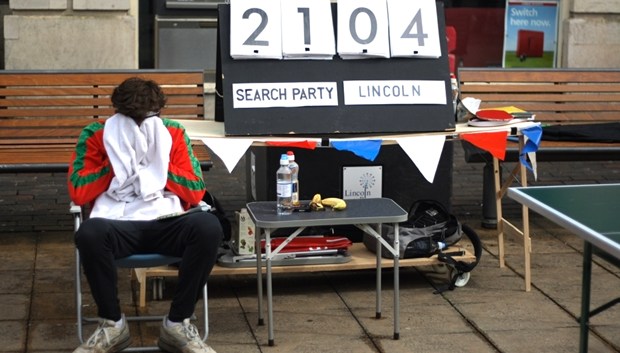 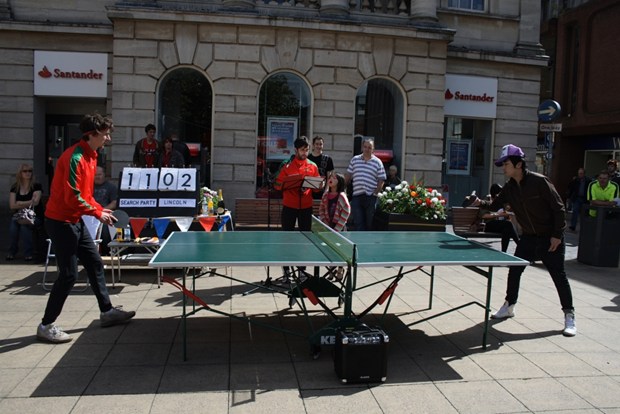 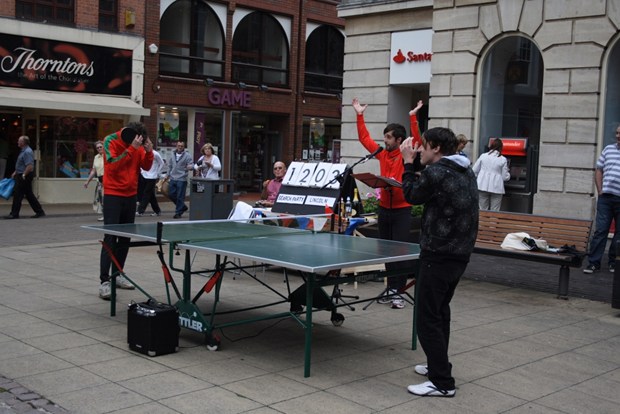 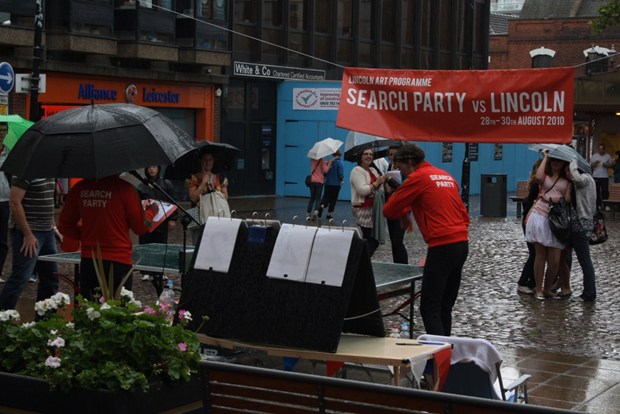 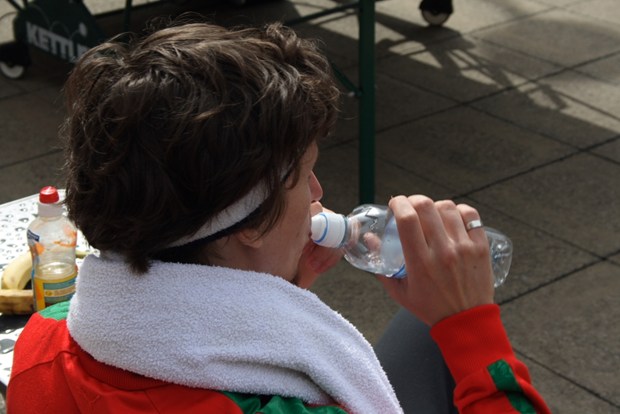 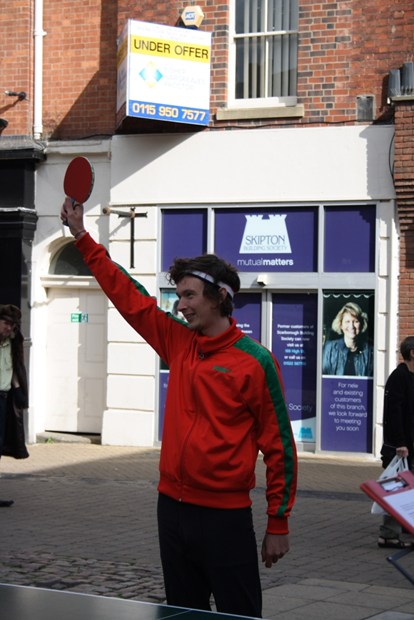 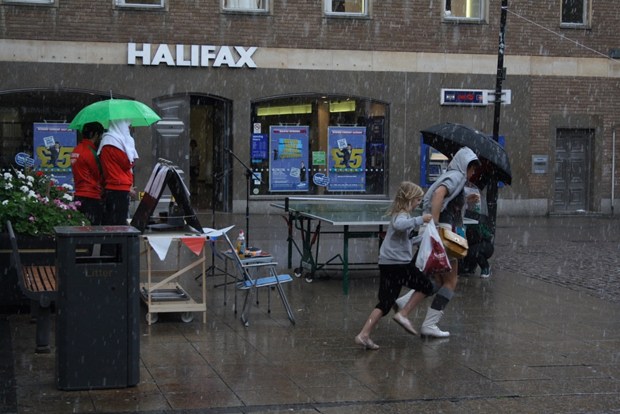 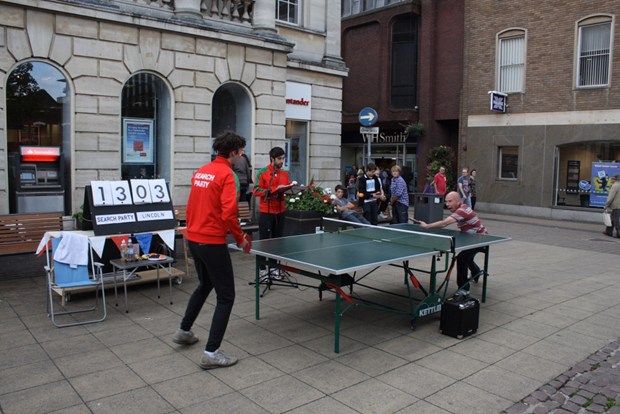 Search Party challenged the city of Lincoln to a three day marathon table tennis tournament. The people of Lincoln responded in their thousands to accept the challenge and watch the spectacle. Opening the tournament was the Mayor of Lincoln who Search Party defeated in straight points, the only player to score zero. By the end of the first day despite torrential rain and the odd breeze Search Party had stormed into a commanding lead with Lincoln only winning four games.
Hearing of Lincoln's deficit Andy from the Lincolnshire Crusaders Table Tennis Club, ranked number one player in the county, number ninety two in the UK came to show Search Party how the professionals play, and provided a lesson in table tennis. His mighty forehand was no match for Search Party and a glimmer of hope shone in a brief moment for Lincoln. During the second day, Lincoln won a third of all matches played but the strong gales that blew across Cornhill Square called off play mid afternoon. The day finished with Lincoln still facing a mountain to climb and despite the score improving Lincoln had yet to reach double figures.
As the day's commentary filled onlookers ears more players took the challenge to Search Party. Despite the wind Lincoln persevered for pride rather than glory, it was clear that Lincoln would be the lowest scoring city Search Party had played. The tournament finished Search Party 61; Lincoln 14.
Characters came and went, the weather became an endurance but the fighting spirit lived on. Search Party came to challenge Lincoln to a marathon game of table tennis, and left victorious. Champagne was shared between winners and losers, hands were shaken, cheers were given, and Search Party stood strong to play another day.
Search Party's interest in sport and competitive participation has informed the Search Party Vs series. Each city they take on has its own stories that are woven into the commentary text, and developed as the event progresses, special moments, unforgettable characters, trials and tribulations become a part of the durational narrative. Search Party came to Lincoln with their own stories, how they had played in the cold in Finland, how the people of Plymouth forced a draw, they left Lincoln with new tales, playing their highest ranked player to date, buying new equipment to deal with the rain and leaving Lincoln as the lowest scoring city by some margin.
Search Party are interested in the way people come together to represent a community and a social pride. This work investigates camaraderie and how un-familiar people share a collective goal through their residence. Search Party's work looks to acknowledge a single moment and occasion in time, to acknowledge a location and observe its presence amongst its people.