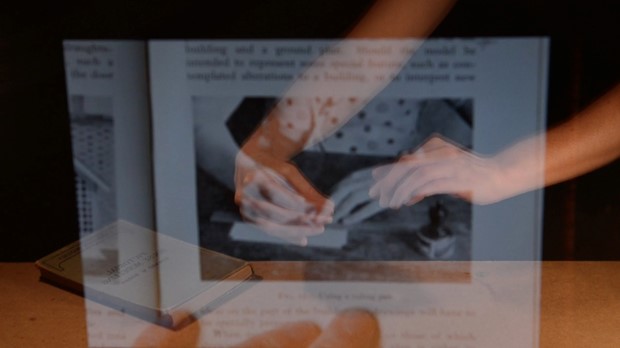 In the 1920s and 30s, an engineer called Edward Walter Hobbs published a miscellany of instructional books, with subjects ranging from 'How to Make Model Clipper Ships' to 'Concrete for Amateurs'. The connecting principle appears to have been the development of skill in changing one’s environment, via practice at a domestic and even miniature scale.

Hobb’s ‘Pictorial House Modelling’ (1928) features carefully choreographed illustrations demonstrating each stage of the process, through a depiction of the hand, posed mid-action.

A model for the making of models.

‘It is difficult to describe in words how to acquire the touch necessary to produce a really keen edge, but the knife should be worked to and fro over the stone, turning the wrist and thereby the blade of the knife at each end of the stroke...’.

Miss Joyce Inall is cited by Hobbs as having prepared the models for the illustrations, and, imagining the hands in the photographs to be hers, I made a performance to camera, my own hands reflected in the glass of the computer monitor, trying to accumulate knowledge by emulating the gestures of a skilled maker.