Home Thinking and Ideas 2016 11 Artist of the Month: Chris Dunseath

Artist of the Month: Chris Dunseath

This month we talk to Chris Dunseath about Quantum Physics, 17th Century bronzes and what makes the ideal studio 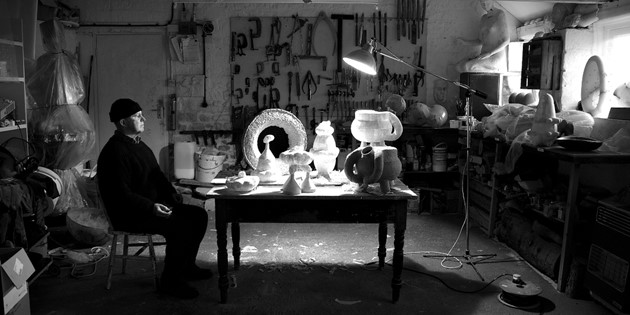 Tell us about your practice, how would you describe the work that you do?

I am recovering from heart surgery and have been tentatively returning to my studio after the longest period of absence (ten weeks) from it in my career. It has been a very strange and frustrating experience not being able to work. I have worked pretty much continuously as a sculptor since graduating from the Post Graduate Sculpture Course at The Slade in 1973.

Some of my current practice can be traced back to early experiences as a student making Kinetic Art that involved pyrotechnics. As movement was integral in the work, the passage of time was a major element and this led to investigations about the nature of time, which resulted in explorations of scientific theories including Einstein’s Theory of General Relativity. My work continues to be influenced by a curiosity about the horizons of Theoretical Physics and it tries to relate sculptural concerns with current ideas that investigate the nature of space, mass and time. It attempts to represent three dimensionally some aspects of the complex and extraordinary ideas of Cosmology and Quantum Physics such as parallel universes, matter and anti-matter and wormholes.

Some of the sculptures have dark interiors that reveal a myriad of stars and are influenced by theories such as the Multiverse, which suggests our universe is only one among an enormous number of separate and distinct universes and far stranger than we could have invented. I agree with the physicist the late Dr. Richard Feynman when he referred to the inadequacy of science to capture the marvel of our universe and for the need for art to help bridge the gap between the tangible and intangible.

The foundations for the conceptual considerations of my work were partly laid when I was appointed as a lecturer at Coventry School of Art in 1974 where the Art & Language group had formed which was highly critical of Modernist assumptions and intensely involved in the Conceptual Art debate. I am less interested in Art that only refers to Art, it can become overly contrived, formal and decidedly incestuous. I prefer Art that considers and reflects significant aspects of the human condition such as the possibility that we live, for the first time, in an age where the universe appears to be capable of becoming conscious of itself through the extraordinary advances by humanity in the fields of Cosmology and Quantum Physics.

As well as work influenced by science, I am fascinated how other ancient cultures operated and made sense of the world. This has included exploring the remains of ancient Egypt on a Churchill Fellowship and this year I have been working with Bronze Age artifacts in the Museum of Somerset’s Heritage Stores, which resulted in the exhibition, New Dimensions which was held at The Museum of Somerset, Taunton, from January to April this year.

Tell us a bit more about the project with the Museum of Somerset’s Heritage Stores? How did it come about and did you work in a different way from usual?

About three years ago one of the curators of the Somerset Heritage Centre gave me a brief tour of their stores. I was impressed by the sheer scale and quality of the collection and expressed an interest in working with the collection should an opportunity arise. I was therefore pleased to be invited by artist Jenny Graham to join a small group of six artists to explore and develop new work responding to the contents of the stores. Support & funding had been obtained from the South West Heritage Trust, Arts Council England and Somerset Art Works. The long lead in time enabled in depth consultation between the artists and the Heritage Centre’s staff about the nature of the project and eventual exhibition. The Heritage Centre’s staff were fully committed to the success of the project. 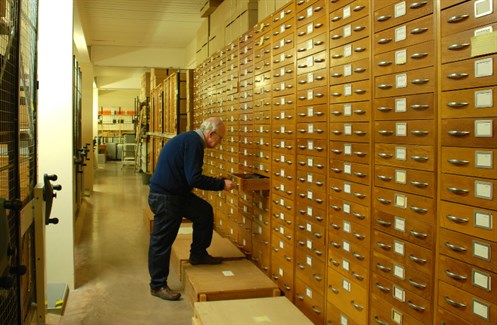 I had as much access to the Heritage Stores as I needed and advice and information from the Store’s curators was always forthcoming. I approached the collection without preconceived ideas in order to enable unexpected lines of enquiry to evolve. I spent a long time exploring the Stores and eventually three main areas of interest were pursued. A series of drawings were made that were influenced by the stud work patterns on an old distressed chest that made a connection between the stud pattern and particles in a bubble chamber. 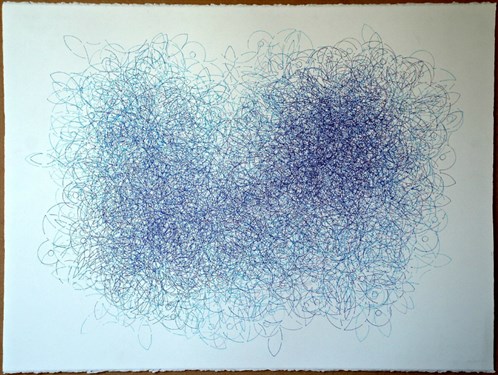 The extensive collection of 17th & 18th century bronze cooking vessels led to a series of sculptural responses in bronze and paper pulp. Their dark interiors revealed a myriad of stars suggesting other universes.

I discovered draws full of Bronze Age artifacts including axes and torcs, which led me to hand cast numerous bronze sculptures, which responded to their sculptural form and patination. Concepts involved with the work included the passage of time, functionality and effects of weathering. As well as the series of bronze sculptures I made a short animated film relating to the corrosion of the axes.

Connections were made between the Bronze Age casting process, which was the cutting edge technology of its time that could make exquisite torcs and current advanced technology resulting in the Large Hadron Collider at CERN. 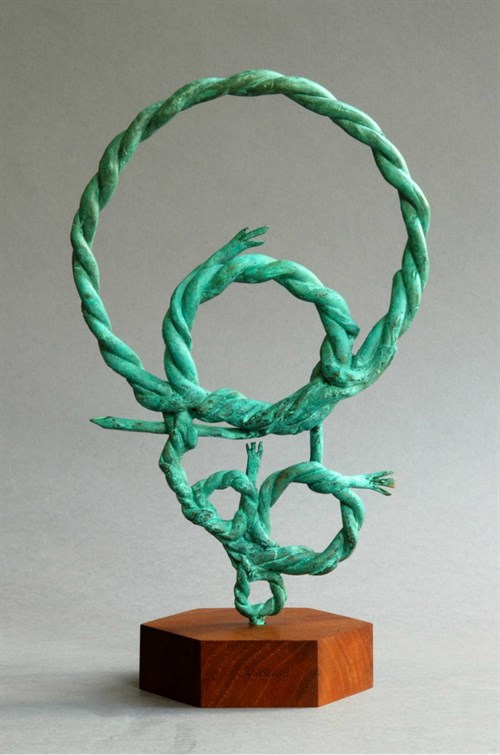 The addition of Tim Martin to the curatorial team enabled his considerable experience of curating contemporary art exhibitions to help define the nature and form of the Museum of Somerset’s New Dimensions exhibition. The experience of exploring the Heritage Store was reflected in the presentation and layout of the gallery space.

Describe your studio set-up, what kind of space do you like to work in?

It has been essential to my practice as a sculptor to have a studio. My ideas are modified by the act of manipulating materials and if I didn’t have a studio/workshop to do that in, it would affect the nature of work that I produce.

As a student & fellow I was fortunate to have fairly generous studio spaces with access to materials & very well equipped workshops and technical support. Starting out I enjoyed the interaction and stimulation of collective studios however over the years I have found the level of focus and obsessive nature of some of my processes have led me to prefer a much more private space. To achieve the level of concentration needed I am becoming more reclusive and do not have any phone or Wi-Fi connection in my studio in order to avoid interruptions and distractions. Over the years I have had a variety of studios, one was quite small and I had to go outside and look through the windows to see what I had made. For much of my career I have worked in a large agricultural barn, which enabled me to work on a larger scale and leave finished sculptures in situ rather than having to put them into store.

I have a separate space for processes that create debris & dust such as chain sawing, stone carving, plaster & clay work. I have a cleaner space with good quality light for drawing and painting. My recent bronzes were prepared in a workshop and I poured molten bronze outside with the help of a skilled fellow sculptor, Ian Middleton. My studio is adjacent to where I live and it is not unusual for me to work in it seven-days a week. 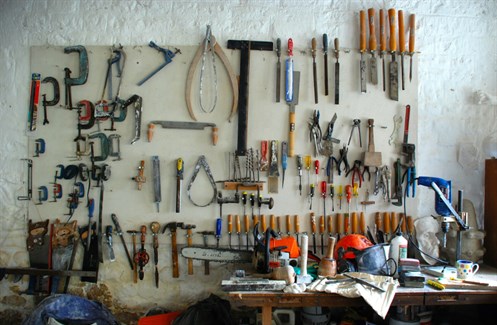 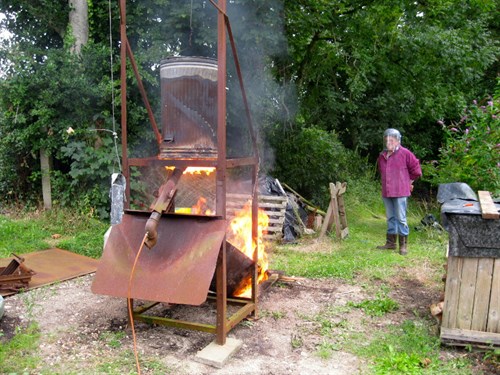 Views of the studio

Describe the role of drawing in your practice.

Drawing has always played a vital part in my work. When I look at other sculptors’ drawings I find it can help reveal how they think and work. My use of drawing takes a variety of forms. I have filled many sketchbooks with drawings that capture ephemeral ideas before they disappear from memory. They can be highly experimental, spontaneous and hopefully lead to accidental discoveries.

On occasions they appear strangely on the paper being at once familiar and unfamiliar as if they belong yet don’t belong. A few may suggest starting points for possible sculptures. Once I have started a sculpture I frequently use drawing to investigate modifications of the idea. Alterations in a drawing can save a lot of time reworking the actual sculpture. Once I have finished a sculpture I may make drawings of it, sometimes placing sculptural forms interacting with each other in an imaginary two-dimensional space.
I also draw to collect and record information, this has included drawings made in Egyptian tombs and ancient artifacts in museum collections. Some of my drawings are quick and immediate others involve complex and intricate processes.

My drawings can be a way of conceptualizing ideas, of making an immediate visual record of a string of thoughts or they can also be a way of exorcising ideas that could interfere with the making of a sculpture. If sculpture can be said to have a physical body, then a sculptor’s drawings are at its nerve ends. 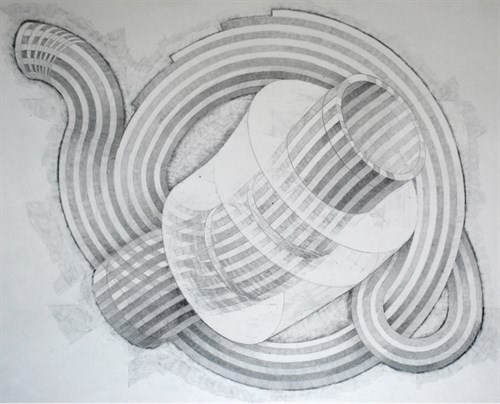 I do admire many artists but I also admire scientists and writers on science such as Brian Green, Marcus Chown and Micho Kaku. As well as looking at a lot of art I take part in rather esoteric scientific group projects such as looking at the terrain of distant planets and categorizing different galaxies.

The artists I admire may seem an odd selection, they tend to be sculptors who may or may not have similar conceptual concerns to mine. Their work demonstrates an honesty and integrity that has not fallen foul to the dictates of fashion. All of them have an in depth knowledge of the processes and materials they use to interact with and manifest their ideas. With some I have followed their careers from their student days and have exhibited with them. David Nash, Peter Randall-Page, John Davies, Richard Deacon, Stephen Cox, Cornelia Parker, Michael Sandle, James Turrell and many others.

What do you have coming up?

I am currently showing a bronze sculpture in the Black Swan Open 2016 in Frome, Somerset until 19th November.

Earlier this year I had a fairly productive time making twenty-seven new works for New Dimensions at the Museum of Somerset. Having to undergo major heart surgery has affected my output and I have been declining most invitations to exhibit for the remainder of 2016. I am now back in the studio drawing, painting and developing ideas. My recent brush with mortality seems to be having an influence on my work. Unlike many artists my work is not normally overtly autobiographic but my recent drawings & watercolours relate rather closely to the physical and mental trauma of surgery. As the work is so new it is difficult for me to take a dispassionate view regarding its quality and make decisions about exhibiting it.